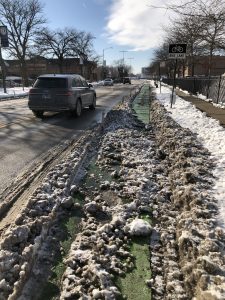 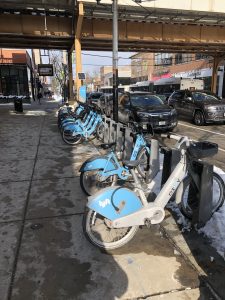 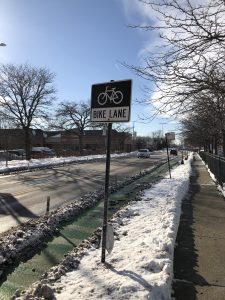 Alderman Vasquez of the 40th Ward in Chicago has been advocating for snow to be cleared from bike lanes after a protest by bicyclists who complained that the bike lanes have not been cleared.  Surprisingly, there were around 103,000 Divvy bike rides in Chicago according to the Chicago Department of Transportation.  However, bike riders have a much more difficult time riding in the winter, and if the bike lanes are blocked with snow and sludge it makes riding a bike unfeasible and very dangerous.  The injury lawyers of Zneimer & Zneimer note that bike injuries happen at all times of year.  Alderman Vasquez also instructs that bike lanes should be cleared regardless if the lane is protected by flex posts or not.  He continues that if a lane is protected by flex posts then a smaller plow needs to be used to clear the lane.  If the bike lane is delineated by just a painted line, then it is easier to clear with just the regular snow plow.

Bike lanes continue to be controversial in Chicago with bicyclist advocating for more protected lanes and for bike lanes to be maintained while motorist complain that the bike lanes take away scarce parking spaces.  Businesses owners also claim that they lose customers because of lack of parking.  Hopefully, these conflicts can be mediated so that both sides are satisfied.