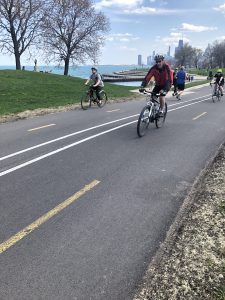 While biking along Chicago’s lake front bicycle path near Diversey Harbor, personal injury attorney, Peter Zneimer of Zneimer & Zneimer P.C. observed much confusion regarding which lanes were to be used by bikers and which lanes were to used by pedestrians.  Some bikers were riding on the pedestrian path while some joggers and walkers were in the bike lanes.  A number of near miss collisions ensued even during the short observation period.  There were no markings on the pavement that would give some instruction to bikers, joggers and walkers as to which lane they were supposed to be in. 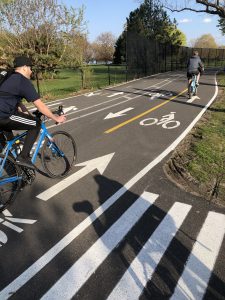 However, farther north near Montrose Harbor, the confusion was alleviated by clear pavement markings that designate that bikers use the two lanes to the west while pedestrians use the two lanes to the east, closer to the lake.  Lawyer, Peter Zneimer strongly urges that these simple and seemingly inexpensive lane markers be painted on the lanes south of Montrose Harbor, near Belmont Harbor and Diversey Harbor and farther south to avoid serious collisions which most certainly will occur without these lane markers.  It is hard to understand why the lanes are not marked with painted designations given the amount of traffic on the path and how cheap it would be to paint them.