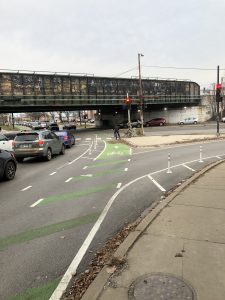 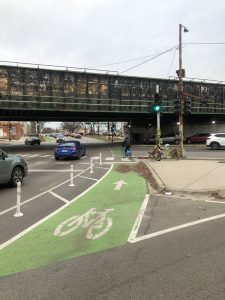 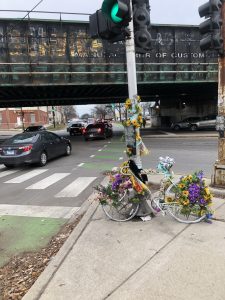 The intersection of Logan Boulevard and Western Avenue has the sad and tragic history of being the site of two fatal cyclist accidents in the last 15 years.  The intersection is congested and confusing in that the traffic lights and the intersection itself is primarily under the Kennedy expressway.  Add to that the Kennedy Expressway has both on ramps and off ramps that are situated at the intersection.   The intersection has been the site of many motor vehicle accidents.  The personal injury lawyers of Zneimer & Zneimer have handled more than one personal injury cases that arose from crashes at that intersection over the years.   Bicyclists are especially vulnerable at that intersection due to the blocked vision under the expressway and the general confusing nature of the intersection.  Without the protection that the metal body of an automobile provides, bicyclist, sadly suffer serious and sometimes fatal injuries when involved in a crash with a car of truck.  The latest bicycle fatality was in the early summer of 2021 when the actor Kevin Clark, who was best known for his role as the young drummer in the hit movie “School of Rock”  was hit by a car while cycling through the intersection.

A separate bike lane has since been added for cyclists traveling on Logan Boulevard with the bike being painted green.  The motor vehicle traffic is also separated from the bicycle lane by plastic poles.  While cyclists applaud the new separate bicycle lanes, not everyone is happy with the new bicycle lane configuration at this intersection. Motorists note that before the changes, Logan Boulevard had two east bound lanes and two west bound lanes for motor vehicle traffic but now, with the new bike lanes, Logan Square Boulevard now has been reduced to one lane for east bound traffic and one lane for west bound traffic causing traffic backups.  Especially aggravating to some motorists is that it appears that there are very few bicyclist using the bike lane during the cold winter months.  This trade off between bicyclist safety and motorist convenience seems to be playing out all over the city of Chicago with motorists complaining that bike lanes take precious parking space and cause additional congestion by eliminating motorist lanes lanes while bicyclist arguing that the improvements are needed to protect the safety of cyclists on the roadway.  The injury attorneys of Zneimer & Zneimer P.C. support bike safety and hope that solutions can be arrived at that accommodate both  the needs of motorists and bicyclists.