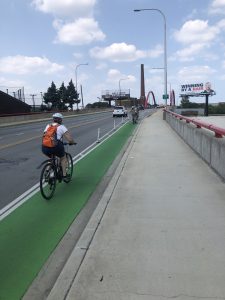 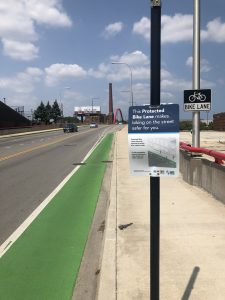 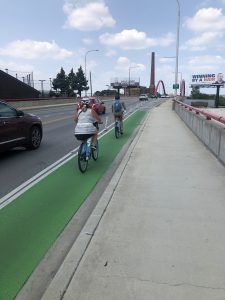 Chicago Transportation Commissioner Gia Biagi in an effort to make Chicago streets safer for cyclists has announced that the City is experimenting with raised bike lanes to keep cars out of cyclists space.  Commissioner Biagi observed that Copenhagen, one of her favorite cities to cycle around utilizes raised bike lanes in its bike lane infrastructure.   Chicago’s Streets for cycling plan envisions 645 miles of protected bike lanes to be in place by 2021.  The options to protect a bike lane from cars can include raised bike lanes, curbs, parked cars between the bike lane and moving traffic and bollards.  Observing that many people will wisely refrain from riding their bicycles on the street without some form of protect more than a painted line on the street, Audrey Wennink, director of transportation for the Metropolitan Planning Council,  expressed the need to build out complete whole networks of protected bike lanes to make transportation via cycle a more feasible option for more people.  As quoted by a Chicago Sun-Times article on bike lanes dated May 11, 2021 Wennink explains: “you need to have bike lanes go a certain distance-connecting all the way from neighborhoods to downtown.  If you want people to ride their bike to work, they need to have a safe pathway all the way from where they start to their destination.”   Though, Mayor Lightfoot is on track to add 100 miles of new bike lanes by the end of the year, Biagi points out that the raw number of new bike lanes is not as important as the few miles of bike lanes that connect one network of bike lanes to another network of bike lanes so that bikers can have a safe path all the way to their destination.

The personal injury lawyers of Zneimer & Zneimer P.C. applaud the emphasis on protected bike lanes to encourage bike ridership and to protect cyclists from the risk serious injuries that are caused by collisions with cars and trucks.  Injury attorney, Peter Zneimer can attest from personal experience with injured bicyclist, the painted bike lane affords little or no protection from getting hit by a moving car or getting “doored” by someone exiting their car without checking for bikes in the bike lane.  With more and more people using bikes for transportation, the city owns it to these cyclists to devote the resources necessary to make their commute as safe as possible.