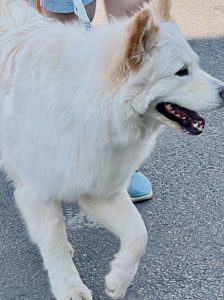 ober 2015, a 45-pound dog named Chelsea bit a mailman. “Walking” in a normal dog’s paws, the Illinois Appellate Court determined that the mailman’s action could have provoked Chelsea to bite him, and therefore the mailman could not recover damages from Chelsea’s owners for the dog bite.

The mailman, Mr. Claffey, was delivering the mail in Glencoe, Illinois, when his job brought him to the Huntleys’ home. The Huntleys’ front door had a mail slot and two flaps, one on the outside and one on the inside of the door. A spring kept the inside flap shut. Trying to ensure that the inside flat will not damage the mail, Mr. Claffey stuck his right hand through the mail slot, lifted the inner flap, and used the left hand to insert the mail.

In addition to a mailbox with two flaps, the Huntleys had two dogs, one of which was Chelsea. Prior to sticking his hand through the mail slot, Mr. Claffey knew that the home had dogs, and heard dogs barking before he placed his hand in the mail slot. The mailman’s mailbox activity caught Chelsea’s attention, and the dog sprung into action, and bit the mailman’s right hand. Mr. Claffey managed to pull his hand away from Chelsea’s jaws, but the top of his hand was ripped and painful. Mr. Claffey sued the Huntleys for the dog bite for damages under the Illinois Animal Control Act.

The Illinois Animal Control imposes liability on animal owners if the injured person demonstrates that he or she (1) suffered injuries from the animal; (2) was at a place where he or she had the lawful right to be; (3) conducted himself or herself peaceably; (4) and the attack was without provocation.  The statute reads as follows:

If a dog or other animal, without provocation, attacks, attempts to attack, or injures any person who is peaceably conducting himself in any place where he or she may lawfully be, the owner of such dog or other animal is liable in civil damages to such person for the full amount of the injury proximately caused thereby.

Mr. Claffey argued that his putting mail in the mailbox cannot be provocation under Illinois law but the trial court declined to decide the issue as a matter of law, and instead presented the issue of provocation to a jury as a factual matter.  The jury found for the Huntleys and Mr. Claffey appealed. The issue before the Illinois Appellate Court was whether the trial court abused its discretion in presenting the case to the jury as a factual matter, rather than determining that Mr. Claffey’s actions could not be provocation as a matter of law.  Claffey v Huntley, 2021 IL App (1st) 191938.  The Animal Control Act states that for the dog owner to be responsible, the attack had to be “without provocation” but what act is or is not provocation has been subject to litigation.

Illinois court decisions have held that provocation is from the point of view of a normal dog. Ultimately, the issue for Mr. Claffey was whether his meddling with the mailbox was an act that was provocative to a normal dog and not to Chelsea specifically.  According to case law, a normal dog is one that is average, and is neither unusually aggressive nor unusually docile. Judicial decisions have differentiated actions that would provoke a normal dog from those that as a matter of law could not. For example, under Illinois law kicking a dog, pulling on a dog’s ears or tail, striking a dog are acts that amount to provocation for a normal dog. On the other hand, petting a dog is not provocation. In addition, a normal dog acts reasonably and proportionately to stimuli. Such a dog does not overreact to petting or greeting, and in a case where an 8-year old child was bitten in the face after petting a dog for about thirty seconds, the court determined that such viscous attack was out of proportion of what a normal dog would do.

According to the Appellate Court, by placing his hand through the mail slot into the interior of the Huntleys’ house, “Claffey breached the enclosure that otherwise separated and protected him from the Huntleys’ dogs.” 2021 IL App (1st) 191938, ¶ 21.

Despite the many Illinois decisions under which the action of the mailman would not be provocation as a matter of law, the Appellate Court cited cases from other jurisdictions for its decision that the mailman’s actions could look like a provocation to a normal dog. The Appellate Court scouted judicial decisions from several other states to reach the result: the mailman’s actions of sticking his hand into a mailbox slot while delivering U.S. mail could be provocative of a normal dog.

Our law firm litigates many dog bite cases each year. This Appellate Court’s decision makes it more difficult for victims of dog bite injuries to recover and is important that victims seek legal advice as soon as possible. If you have suffered injury as a result of a dog attack, contact the law office of Zneimer & Zneimer.