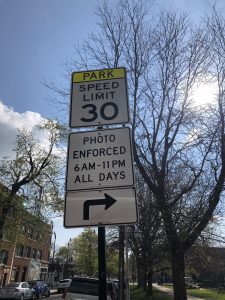 Chicago is now issuing motorists tickets for getting caught on a speed camera for going 6 miles per hour over the speed limit.  The tickets are issued through the mail along with a photo of the speeder’s vehicle.  The City of Chicago asserts that the change was necessary to encourage drivers to slow down, noting that traffic fatalities rose 45 percent in 2020.   A total of 139 people died in traffic crashes in Chicago in 2020.

Alderman Anthony Beale and other critics are skeptical that safety was the major motivation in the change and suspect that the additional ticketing was implemented to raise revenue.  The City currently has 88 active speed cameras located around schools and parks to churn out tickets to a motorist going over 6 MPH over the speed limit.  One anomaly of the system is that 50 speed locations have cameras that are only facing one direction.  As a result, at these locations only vehicles with front license plates will get a ticket.  It was noted that Chicago’s top 15 speed cameras locations, 83,000 speeding vehicles were not ticketed because they did not have front plates.

The personal injury lawyers of Zneimer & Zneimer P.C. take note of the rise of traffic fatalities in the city of Chicago in 2020 and encourage the City to take action and implement improvements that will slow traffic down and will make the streets and crossings safer for pedestrians and bicyclists.  Such changes could include dedicated bike lanes, pedestrian islands, and “bump-outs” that extend the sidewalk into the intersection. Additionally, restricting right turn on red would also help prevent pedestrian injuries.