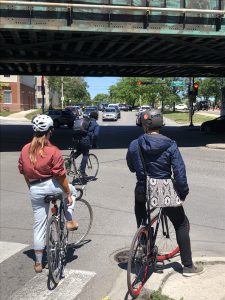 Cyclist deaths are always tragic, but for fans of School of Rock the passing of Kevin Clark holds a special poignancy. Clark, who played drummer Freddy “Spazzy McGee” Jones in the 2003 film, was killed after being hit by a car at the intersection of Logan Boulevard and Western Avenue on May 26.1 The intersection is widely viewed as one of the most dangerous among the cycling community, a sentiment bolstered by the fact that it was the scene of another cyclist death in 2008 when a 22-year-old was also struck by a car.2 Clark’s passing has renewed calls to install protected bike lanes at the intersection and to grant more consideration to Chicago’s cyclists more broadly.

The city is not necessarily hostile to bike-riders, despite accidents like the above. Indeed, according to a recent study by LawnStarter, Chicago comes in at number 30 out of 200 for best biking cities in the U.S.3 Notable amounts of bike lanes, rental options like Divvy, and miles of lake front trail all help make it an attractive place for cyclists. Nonetheless, what accidents do show is just how fragile cyclists’ lives are and how important it is to continue making the streets safer for all occupants. One bad intersection, one large pothole, or one apoplectic road-rager is all it takes to put someone in harm’s way‑-something that should be kept in mind by drivers and planners alike.

In a general sense, what Clark’s death demonstrates is that accidents can strike at any time. Murphy’s Law is always looming on the sidelines, waiting to make its presence felt. We at Zneimer & Zneimer, P.C., are acutely aware of this, and we are always ready to help when things go wrong. Give us a call if you are ever in need of a personal injury attorney, and if you would like to pay homage to Mr. Clark, give School of Rock a rewatch or imagine Spazzy McGee banging on a celestial drumkit somewhere out there in the cosmos.