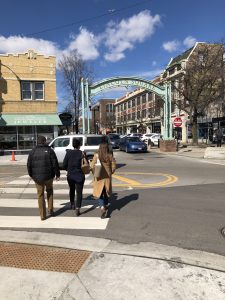 More macabre numbers for pedestrians as the Governors Highway Safety Association released on Thursday disturbing statistics regarding pedestrian deaths. According to the GHSA report, a total of 6,590 pedestrian lives were lost last year – the highest number in 30 years. (https://www.ghsa.org/resources/news-releases/pedestrians20.  The numbers speak for themselves and warrant intervention from everyone involved, including pedestrians themselves and spurs the question, how can walking claim so many lives?

Interestingly enough, there has been a steady decline of traffic casualties over the last few years. We have seen improvements in vehicles equipped with the latest crash avoidance and mitigation technology. Many US jurisdictions have implemented traffic safety programs, addressing poorly designed roadways and educating motorists on basic safety practices to prevent distracted driving, especially in the smartphone age. Why then are we seeing an uptick in pedestrian deaths? To Chicago personal injury attorneys at Zneimer & Zneimer, P.C., this comes as no surprise. It is important to note that most pedestrian deaths occur in metropolitan areas, where there is high foot traffic, as more people are willing to commute less and walk more. Metropolitan areas normally have a profuse nightlife, with many bars and entertainment venues, thereby increasing the likelihood of alcohol impairment in individuals walking the streets at night, in the dark. There is a proliferation of SUV’s on the streets, behemoth vehicles that as studies have shown in the past, accounted for an 81 percent increase in single-vehicle pedestrian fatalities. These behemoth vehicles with their unforgiving higher front-end profile does not discriminate between walkers, joggers, the old and the young and have killed numerous, from the strong impact combined with the velocity at which the SUV was running. (https://www.chicagoaccidentlawyerblog.com/big-increase-in-pedestrian-deaths-linked-to-suvs/)

Vehicles will always win over pedestrians and cyclists, the latter of which has about a 2% share in all traffic related fatalities each year. Though the city of Chicago has embraced initiatives such as Vision Zero and recently, a proposal (https://chicago.suntimes.com/politics/2020/2/19/21143864/lori-lightfoot-bike-lanes-bus-crackdown)  to curb bad driving behaviors downtown like scofflaws parking in dedicated bus and bike lanes, the challenge to reduce pedestrian and cyclist death looms ahead.  The lawyers of Zneimer & Zneimer note that we have a long way to go.