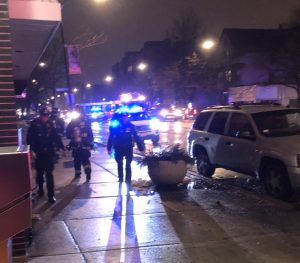 Most of Illinois has been shuttered from the pandemic especially after the shelter-in-place orders Governor Pritzker has issued but it has not stopped people from hopping in their vehicles and driving recklessly and over the speed limit. Chicago which has a 30mph speed limit in most streets, have seen a spike in drivers speeding furiously above that. On April 15, 2020, a 50-car pile-up occurred on the Kennedy Expressway – the worse the city has seen in a while, even considering the wet and snowy conditions.

When the shelter-in-place order began in the middle of March this year, the city of Chicago saw a decrease in traffic as more people take fewer trips in their cars and more calculated ones for essential tasks. Similar patterns have emerged in large cities notorious for traffic congestion, such as Los Angeles and New York, where much of daily life has been grounded to a halt after the Covid19 outbreak. The streets at first were apocalyptic. But as with every crisis in history, there are people who stand to lose and people who stand to gain. That’s where the Fast and Furious wannabes come in. To these people, empty streets make for great racetracks. Motorists are treating Chicago highways as if they were Germany’s Autobahn.

The first week of March was greeted with 2,063 crashes but by mid-April the number of crashes reported went down to 803. A WGN article has noted fewer crashes since the shelter-in-place order but found an increase in the severity of the crashes. They have attributed this to motorists speeding on the streets, exceeding the speed limit by more than 75 percent above average in one week. Covid19 has lessened traffic congestion but has encouraged speeding, harming vulnerable pedestrians and bicyclists alike. It only takes one reckless driver, with a selfish disregard for bike lanes or bus lanes, whose only concern is to shave minutes getting from point A to point B for a tragedy to happen. The lawyers of Zneimer & Zneimer P.C. urges drivers to slow down and calm down while driving.