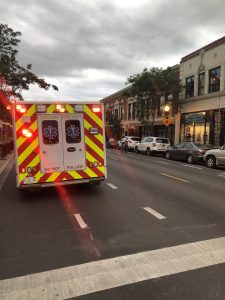 The state of Illinois is upping it’s reinforcement of Scott’s Law, nearly 19 years since the death of the law’s namesake, 37 year old fireman Scott Gillen, from a tragic accident. Governor JB Pritzker incorporated harsher penalties into the legislation, which is a variation of the “Move Over” law, increasing the fines for a first violation to at least $250, and at least $750 for any further violations.  The maximum fine could be up to $10,000. This comes as no surprise considering violators of the law cost the lives of three state troopers this year alone, with 22 drivers on record crashing into State Troopers along the side of the road this year.

Scott’s Law makes it a requirement for other drivers to cede their right of way, yield and slow down for any vehicle with its hazard lights on, to give emergency workers safe clearance while doing their jobs.  The morning of December 23, 2000, Lt. Scott Gillen was attending to a crash scene, doing everything he was trained to do and followed standard protocol, when an intoxicated Carlando J. Hurt failed to respect the flares and the warning signs surrounding the scene, pinning Lt. Scott Gillen to his firetruck and killing him. Earlier this year, State Trooper Christopher Lambert also died when he was struck by another vehicle that failed to slow down or move over.

Though Scott’s Law was enacted and designed with emergency workers in mind, in reality, it traces back to a more common issue which is distracted driving. Personal injury attorney, Peter Zneimer of Zneimer & Zneimer, P.C. believes that as a general rule of thumb, all individuals sharing the road must proceed with caution, no matter their role in any given situation.