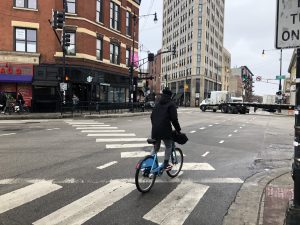 Biking advocates are pushing for the city to recommit to its goal to make biking safer after the recent deaths of three cyclists. Although Chicago has a reputation for bicycling and was named the top city for bicycling in 2016, the city has averaged 5.5 deaths of cyclists per year since 2012.

In 2012, the city adopted a plan to build more protected bike lanes across a 645-mile network of on-street bikeways by 2020. Although Chicago initially pursued this plan by building or upgrading 116.25 miles of bike lanes between 2012 to 2015, the pace of bike lane construction has fallen significantly. Since 2015, the city added merely 66.4 miles of bike lanes, and only 8.5 of those miles were protected. Yet in this time (from 2012 to 2018), 5.5 bicyclists were killed per year in the city.

In 2017, in the wake of a “right hook” incident where a bicyclist was killed after a truck that was traveling in the same direction turned in front of her and trapped her under the truck’s wheels, bike advocates effectively lobbied city officials to pass an ordinance requiring the city’s truck fleet to be equipped with convex mirrors and side guards – to prevent someone from falling under the truck’s wheels – by 2026. This ordinance also requires trucks operated by companies with city contracts to implement these changes by 2021.

Even with a plan that requires protective vehicle equipment for trucks driving in the city and installation of more safety infrastructure for bike lanes, biking advocates say the city is falling behind other cities in protecting its cyclists. Cities like San Francisco and the Twin Cities in Minnesota have more miles of protected bike lanes than Chicago, despite their smaller size. New York City, which has three times more bike lanes than Chicago, has 10% of its bike lanes protected – compared to only 8% of Chicago’s bike lanes protected.  The Attorneys of Zneimer & Zneimer P.C. have handled many cases for bicyclists who were injured riding in traffic because of the absence of a protected bike lanes.

Drivers who park in bike lanes also pose dangerous conditions for city bicyclists. Obstructed bike lanes force cyclists to merge into faster-moving traffic, which increases risk of injury to the cyclist and “road rage” incidents to the drivers. Advocates argue that the city should not simply write more tickets because this will not change behavior and it could disproportionately affect disenfranchised communities. Instead, more focus should go toward building more protective bike lanes and promoting caution to the city’s drivers. Chicago personal injury lawyer, Peter Zneimer, notes that these improvements on the safety of cyclists should encourage more people to ride bikes and prevent cycling deaths in the city.