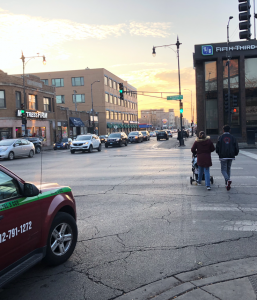 Everyday, Chicago drivers navigate busy streets that are flooded with other vehicles, bicyclists, and pedestrians – all hurriedly trying to get to their final destination. And one maneuver drivers often make places everyone who shares the road in a tricky, and sometimes dangerous, situation – making a left turn.

Nationally, nearly 180 pedestrians die annually after being struck by a vehicle making a left turn. Peter Zneimer, personal injury attorney at Zneimer & Zneimer PC in Chicago, notes that these accidents can occur even though all traffic signals are obeyed – the turning driver has a green light at the same time pedestrians have the walk light. Before making the turn, the driver has to quickly consider when the light will turn, whether the oncoming lanes are clear, and if pedestrians are in the car’s blind spot (not to mention the distracting honks coming from the car behind). These split-second considerations make up what is called the “driver workload,” according to Jeff Shaw, the Intersections Program Manager for the Federal Highway Administration’s Office of Safety.

One factor of the driver workload is gauging the speed and distance of oncoming traffic, and often times drivers speed through the intersection to make it before light turns red. This acceleration is a primary reason why left turns are more deadly for pedestrians than right turns. Another factor contributing to the driver workload is a vehicle’s blind spot, specifically the car frame’s A-pillars. A-pillars, or windshield pillars, block a driver’s view of the road. The driver must break out of her normal field of vision to check for objects like pedestrians that may be positioned within these blind spots, which may pose a risk to hazards that may appear within the driver’s normal field of vision while she is performing the check. According to Dr. Matthew Reed, Professor at the University of Michigan’s Transportation Research Institute, “When we compare the data, we find that drivers could see more outside their vehicles in the 1980s than they can now.” Many modern vehicles have wider A-pillars, and bigger blind spots as a result. One nationwide company has devised an innovative solution to dealing with the danger of left turns – it doesn’t do them!

The 2019 Illinois Rules of the Road states that both drivers and pedestrians are responsible for traffic safety, but a driver should always be prepared to yield the right of way. The personal injury lawyers at Zneimer & Zneimer PC recognize that accidents happen even with proper precautionary measures, but drivers can reduce the risk of striking pedestrians by not accelerating into intersections and checking their blind spots before making left turns. It’s better to plan a safe turn than to risk injuring someone – their life shouldn’t be left to chance.