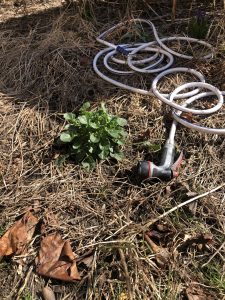 A $2 billion entered in favor of a Livermore, California couple that had contracted non-Hodgkin’s lymphoma because of their use of  Round-Up Weed Killer produced by Monsanto.  Monsanto is appealing the verdict.

The root of the legal issue revolves around the key ingredient in Roundup, glyphosate. Bayer maintained that glyphosate is not a carcinogen, but plaintiffs offer research that shows glyphosate can cause non-Hodgkin’s lymphoma and multiple myeloma. Glyphosate is the most widely-used herbicide in the United States. It is used on nearly every acre of corn, cotton, and soybeans grown in the United States and many Americans have used it to treat their lawns and gardens. Despite its common use, many jurisdictions across the country have banned or restricted the use of glyphosate until more is known about its health effects.

Roundup was first sold commercially by Monsanto in 1974, but Monsanto genetically engineered crops to tolerate glyphosate in 1996, which became known as “Roundup Ready” seeds, that furthered Roundup’s use on farms across the globe. Due to its widespread use, glyphosate can be found in water, food, and dust. However, little is known about the magnitude of human exposure because of minimal testing for glyphosate residue. While Bayer maintains that the active agent in Roundup does not pose a risk to people and the Environmental Protection Agency decided that it did “not likely” cause cancer in humans, the World Health Organization’s International Agency for Research on Cancer called glyphosate a “probable human carcinogen.”

The most vulnerable population affected by glyphosate is agricultural workers, who are heavily exposed to the ingredient throughout the workday. Scientists from the University of Washington found the agricultural workers who used glyphosate had a 41% higher risk of developing non-Hodgkin’s lymphoma than people who used it rarely or not at all. Generally, about 2 of every 100 Americans develop non-Hodgkin’s lymphoma, however the rate increases to 2.8 out of 100 for people who are greatly exposed to glyphosate.

As part of a settlement for a class-action lawsuit filed in federal court in Kansas City, Missouri, Bayer agreed to pay $39.6 million to settle claims that Roundup’s label was misleading. Bayer also agreed through this settlement to remove language from the Roundup label that states glyphosate only affects an enzyme found in plants. This is considered a “win” for users and plaintiffs who argue that the ingredient attacks an enzyme in humans. This is not the first time Monsanto has had to defend its product. In 2007, a French court found that Monsanto had falsified data on Roundup’s safety when it marketed Roundup as “environmentally friendly” and “biodegradable.” Monsanto was fined 15,000 euros for false advertising.

Bayer and its shareholders hope to resolve claims through mediation. Ken Feinberg, the court-appointed lead mediator, has indicated that deals may be reached soon on 85,000 Roundup claims, but the settlement offer amounts have remained undisclosed. Bayer felt the pressure to settle cases when Roundup claims swelled after three jury verdicts awarded plaintiffs nearly $2.5 billion. Some of Bayer’s lawyers have warned that the company is willing to put Monsanto into bankruptcy in order to isolate the financial damage in case Bayer feels that reasonable deals can’t be reached.

As Bayer prepares for a long legal battle, it is important to remember the real victims in this situation – the users of Roundup who were harmed by the product and are now forever changed as a result. If you have been diagnosed with non-Hodgkin’s lymphoma as a result of Roundup, personal injury attorneys,  Zneimer & Zneimer, P.C., can help. You may qualify as a member of a class action lawsuit against Monsanto and Bayer AG. Call our office for a free consultation about this issue or other personal injury claims.