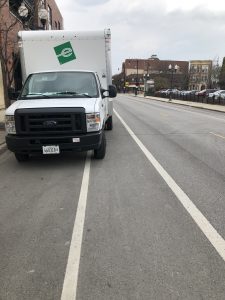 As most of the nation grapples with the Covid-19 pandemic and the subsequent executive orders deterring individuals and groups to be outside save for when fulfilling what are considered “essential tasks”,  it is admittedly a challenge for Chicago residents to ignore a beautiful spring day. Lulled by the sun and the warmth, add to that the unmistakable signs of life and growth with flowers budding in abundance and grass an almost mocking green —  many Chicagoans have crawled out of their trenches to discard their solitude temporarily for a brief return  to normalcy. Some stroll, others take a road trip, while others dust the cobwebs off their bicycles to go out for a ride. The streets once devoid of traffic are now humming with life.

Prior to waging war with a highly transmissible virus, Chicago has long waged war on curbing congestion, especially downtown. Chicago has been successful in adopting Vision Zero in recent years, affording cyclists more room even in busy areas, as well as the construction of dedicated bus lanes for transit users. But as Martin Luther King once remarked, “All progress is precarious, and the solution of one problem brings us face to face with another problem”. In addressing safety concerns over cyclists and pedestrians through the adoption of Vision Zero, out of the woodwork arise the ride-hail apps such as Uber, Lyft and Via, giving the city another problem to contend with. Since we are living in the age of convenience, where we can order merchandise and food on-demand, our streets are rife with delivery vehicles that park improperly on bike and bus lanes. Personal injury attorney Peter Zneimer knows the dangers posed when vehicles encroach bus and bike lanes are real. The injuries stemming from such grisly accidents are horrendous and in most cases, result in death. Far too often, scofflaws get away with not getting a ticket by driving off while the ticket is being written.

Mayor Lori Lightfoot clearly had enough already when she proposed a new ordinance last February allowing parking aides to take a photo of the insubordinate driver’s vehicle without having to hand the citation in real time. Instead, the citation will be mailed to the vehicle owner. Should this legislation pass, it can ease congestion in glutted areas, increase transit ridership and decrease accidents involving cyclists and pedestrians alike. If there is any takeaway from the onslaught of Covid-19 into our lives, it’s that whatever role we play, be it that of a motorist, a cyclist or a pedestrian, we should all look out for one another and stay safe.